Music drama :  an opera having more or less continuous musical and dramatic activity.
: an opera in which the musical and dramatic elements are of equal importance and strongly interfused.
: characterized by a continuous flow of orchestral music, with an integrative use of musical themes (leitmotifs), and singing that                           is free from formal division into arias, recitatives, etc.
: a genre of drama in which singing and dancing play an essential part.
: Musical theatre is a form of theatre combining music, songs, dance, and spoken dialogue
FIRST INTRODUCED BY RICHARD WAGNER. 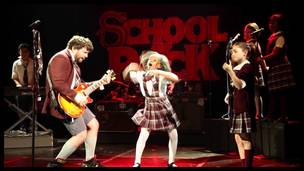 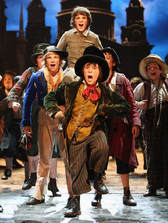 
Musical theatre comes in the following categories and here are some examples........

1. Book musicals: A "book musical" is one with traditional musical with a story that drives the music and characters. This category includes: "CATS," "RENT," "Annie," "The Book of Mormon," and "Oklahoma"!

2. Revue musical: "Revueus" are a collection of songs, with a common element. This category has no definite shows dedicated to them, but they are still a part of the musical theatre genre. This can include a musical revue of composers of musicals, or a well-known actress.

3. Concept musical: A "concept" musical is where the metaphor or theme is equally or more important than the musical itself. It may comment on a social injustices. There may be dissociated plot line, or unacquainted characters. Category includes: "The Last Five Years," "Allegro," "Follies," and "Love Life."

4. Jukebox musical: A collection of songs from a group or artist is called a "jukebox musical". These musicals may not have a storyline, but are created to showcase a performance. Category is: Mamma Mia! (The music of ABBA), Ring of Fire (Johnny Cash), Rock of Ages (Glam rock of the 80s), and Come Fly Away (Frank Sinatra)

5. Rock/Pop musical: The use of rock or pop music (or Rock/Pop Opera) to further the story, usually with little to no dialogue. This category includes such amazing works as "Grease," "The Little Shop of Horrors," "Godspell," "The Phantom of the Opera," and "Next to Normal."
​
6. MUSICAL DRAMA:  Most of the traditional / classical musicals feature in this category – they use music as another way of expressing emotion.  Characters will typically burst into song when the emotion of a scene is too much to be expressed using words alone.  They also tell a normally quite emotional story like the story of Billy Elliot where a young boy wants to pursue a career in dance but he lives in a time where men box – not dance.

7. Sing Throughs: Musical theatre is separate  from Opera but bears a very close relationship to it and no more so then in Sing Through musicals like Les Miserables and Jesus Christ Superstar.  In a nutshell a sing through musical is one where their is always a music of some kind running through the entire musical and all the words are sung.

8. Musical Comedy: This type of musical is for those who love to laugh (bet that surprised you), they generally have stories which lend themselves to comedy addressing socially relevant issues that make for a great comedy musical.  La Cage Aux Folles would be another good example.

​9. Film to Stage Musicals: These musicals are based on (sometimes well known) films like the recent production of The Bodyguard which started life as a film musical. In some cases the music from the films make it into the stage musical – not in the case of Sister Act which had a brand new score written.  Another example of this type of musical was Priscilla Queen of the Desert The Musical.
​

Monologue
A monologue is a “long speech given by a character in a story, movie, play, etc., or by a performer”.
It should have a precise beginning and ending, with an interest provoking interior.  It should show off your acting ability and generally match your personality.  It should also match your age and gender.
Charlie & The Chocolate Factory (Roald Dahl):
Slugworth: I congratulate you, little boy. Well done. You found the fifth Golden Ticket. May I introduce myself. Arthur Slugworth, President of Slugworth Chocolates, Incorporated. Now listen carefully because I’m going to make you very rich indeed. Mr. Wonka is at this moment working on a fantastic invention: the Everlasting Gobstopper. If he succeeds, he’ll ruin me. So all I want you to do is to get hold of just one Everlasting Gobstopper and bring it to me so that I can find the secret formula. Your reward will be ten thousand of these. (he flips through a stack of money) Think it over, will you. A new house for your family, and good food and comfort for the rest of their lives. And don’t forget the name: Everlasting Gobstopper.

Bullied, Bungled and Botched:
Luke:Hello. I am taking applications to my official bully. I want to make sure the right person is picking on me day after day. It's a very unique and special relationship.  Ready for some questions? Okay. First of all, are you interested in my lunch money or my lunch? Because if you need the cash I will bring that it if you prefer to have me bring a lunch already prepared, I can do that too.
​No this isn't a joke. I'm very serious about this. Or do you prefer I tell jokes? Are you the knock knock joke kind where you walk up and knock on my head? Knock! Knock!  Or do you prefer the walk in to the bar kind of jokes?
I could try work up some dirty jokes too but that seems more appropriate for your friends to tell than your victims. We have to have the right kind of relationship here. We need familiarity without closeness.
I can provide services such as homework preparation and go-foring - in return I ask that I only receive swirlies at the end of the day so I can go home and shower after.  And then one more thing - the most important part of all this - I ask for your protection. I want you to protect me from all the other bullies. This has to be an exclusive bullying arrangement and you have to make sure you step in at the first sign of any danger from other bullies. I like my day to be predictable - deliver your homework in the morning - lunch or lunch money at noon and then a farewell swirly or wedgie in the afternoon - yes I will even throw a few wedgies in the deal - so what do you say? Do we have a deal? Good - sign here please.

​The Pirate and the Princess: An Orchestra of Stink
BONES: Now we need to teach you to be a pirate. Sly will be there to help but you need a few tips from a real pirate first.
Lesson 1... you can't be happy.
Pirates are always grumpy and if something good happens, they growl and get angry. It might look like they are excited but they're not. They're angry that it wasn't better. And they'll stay angry until all the treasures of the world are theirs. And then the anger dies down, they get grumpy again.
Lesson 2... no baths, no washing, no cleaning up, no perfume...
Nope, nada, zip. Pirate's take pride in their stench. It's like a contest or something. And it makes it easier when everyone smells bad. If you're the only one who smells good, it's rough. It's better to blend in the bad smells... it's like an orchestra of stink. If someones out of tune, it throws off the balance.
Lesson number... the next one... You have to stop being so girly. Female pirates are the roughest, toughest, leanest, meanest human beings... nay... creatures! ...to ever travel the sea. If a male steals one gold, you steal two. If a male cuts off one finger, you cut off two. Be better or be dead.
​

*Theatre was created to tell the truth about Life - Unknown

​*I love acting, its is so much more real than Life - Oscar Wilde

*The play is not in the words, its in YOU - Stella Adler

As on stage I take my place,
I pray that I know not disgrace
Allow me not to drop a cue
And neither on the scenery chew
Make not my props to go astray
That I may not be left to groan
And hang upon the stage alone

Make all the critics to be kind
To imperfections make them blind
And keep my brain both quick and cool
Lest of myself I make a fool
Make all my lines be spoke as writ
Please make this play to be a hit.